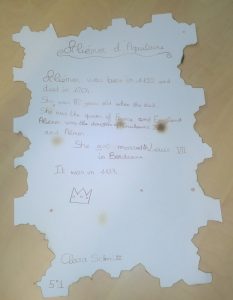 Her parents are Guillaume X and Aliénor de Châtellerault..

She had a sister , Petronille and a brother, Guillaume Aigret.

Aliénor loved troubadours, she was raised with him.

So, at the end, she has a big Empire.

She was born in 1124 and her parents were Guillaume X and Aénor Of Châtellerault.

She had sister and brother : Their names were Pétronille and Guillaume Aigret.

Her father died 881 years ago.

After the death of Louis VI, father of Louis VII, Aliénor and became king and queen of the francs.

Later Louis VII and Aliénor had two daughters : Marie of France and Alix of France

Then she divorced VII and she married Henri Plantagenet or Henri II so she became Queen of England.

She had 2 daughter with him.

Then, she married Henry Plantagenet.

She had 8 children with him.

She was Queen of France then England.

She liked music and troubadours.

This was her son, Richard cœur de lion,who freed her.

The life of Aliénor’s Aquitaine

Aliénor was born in 1124 in Poitiers, she was born 894 years ago. Aliénor lived in Aquitaine . Aliénor became queen in 1137.  She married Louis VII then Henri ll .

She was queen of England then of France. Aliénor was in jail for 16 years. She died in 1204 in Poitiers. 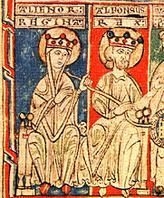 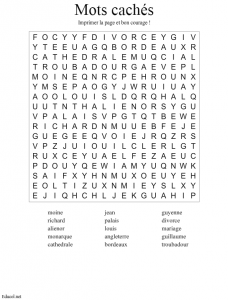 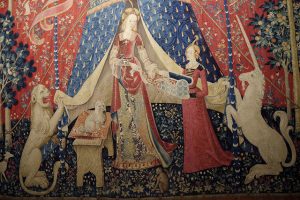