Dog version of the Super Bowl

The Puppy Bowl is an annual television program on Animal Planet (American TV channel) that mimics an American football bowl game similar to the Super Bowl,using puppies (baby dogs) from shelters (like the SPA in France)

Puppy Bowl is filmed inside a miniature « stadium » that is 19 feet (5.8 m) long by 10 feet (3.0 m) wide. Only puppies between 12 and 21 weeks old are allowed on the show, and there is a height and weight limit due to the size limitations of the play area. Puppies must show that they are well-socialized with people and other puppies, and that they have the full range of vaccinations.

The goal of the show is to get the puppies adopted. 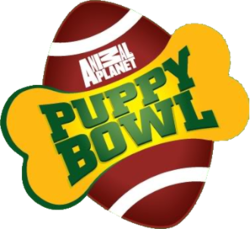 This is the lineup (composition of the teams) from last year’s Puppy Bowl: