Home » Cadre européen des langues » 13 and Mount Everest ahead of him!

13 and Mount Everest ahead of him!

A 13-year-old American boy is set to attempt to climb Mount Everest, in an effort to be the youngest person to scale the world’s highest peak.

Jordan Romero has set off from Nepal’s capital, Kathmandu, to the base camp on the Chinese side of the mountain.

He will begin his ascent there, along with his father and stepmother.

Jordan climbed Mount Kilimanjaro in Tanzania aged 10 and wants to be the youngest person to climb the highest mountains on seven continents.

His father and stepmother have been with him on all his mountain climbs.

The current record for the youngest climber of Everest is held by Nepali Temba Tsheri, who was 16 when he reached the peak in 2001.

Jordan Romero has already climbed the highest peaks in every continent apart from Asia, although he is not planning to tackle the Vinson Massif in Antarctica.

“It’s something I’ve always wanted to do before I die – I just happen to be doing it at this age. I happen to be going for a world record. But I just want to climb it,” Jordan told the AFP news agency ahead of his Everest attempt.

The latest post on his website says: “It’s time to mobilise” and that the five-day drive to the Chinese base camp was about to begin.

There have been concerns about allowing somebody of Jordan’s age to make the ascent but he has said he will not take any unnecessary risks and will turn around if any problems arise.

Before he begins climbing, he will spend some weeks acclimatising at base camp.

Asked if, given the risks, a 13-year-old could make an informed decision to climb Everest, his mother, Leigh Ann Drake, told the BBC World Service that her son would be with his father the whole time.

She also said that Jordan was “not an adrenalin junkie”.

“He’s very quiet and focused and determined and he is not there to suffer loss. Everybody is very clear on this. Jordan’s safety, from the top of his head to the tip of his toes, is everybody’s number one priority.”

According to his mother, Jordan is: “taking his algebra book and some writing assignments” on his ascent.

“He’s going to have some down-time in those tents,” she said, “so why not take some books along?”

Sum up in  your own word what Romero is trying to do.

Can you  find  the adjectives qualifying Romero’s qualities ?

Find the passage where we learn that he is doing his homework?

How do you react to his decision?

What do you think of the sentence: ” It is something I ‘ve always wanted to do before I die?”

I just want to do something big and  something I wanted to do for myself:

and it was just all about the experience

and I just happen to be thirteen

and I feel ready

I feel as ready as can  be

I’ve been training long, you know,  over 7 summits for about four years for this!

I am feeling stronger than ever

I’ve been eating a lot, putting on fat  and  calories

so I feel ready!

What does he want?

Underline in red the physical preparation and in green the emotional state of mind.

You may have to underline twice (2) the same  statement

“It’s something I’ve always wanted to do before I die – I just happen to be doing it at this age. I happen to be going for a world record. But I just want to climb it,”

What do you think of Jordan’s project?

Jordan’s project is  very brave and daring. It may sound rather foolish.

It is also an ambitious and dangerous adventure. I find it odd when he says:

“It is something I wanted to do before I die.”

It sounds strange  for a healthy thirteen-year-old teenager. Yes, it does!

It is rather strange to think about death  as he is neither ill nor depressed. (?)

Personally, I would like to go with him and be part of the  team and adventure.

It must be a fascinating experience, don’t you think so?

He is very lucky to have his friends and family ( and a very important team) by his side.

All these people will look after him and will take care of him during the experience. 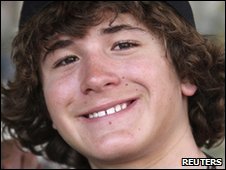 Jordan Romero was due to do some school work during his trip A 13-year-old American boy has become the youngest person to reach the summit of Mount Everest, his family says.

Jordan Romero, from California, telephoned his mother from the peak of the world’s highest mountain, she said.

“Mom, I’m calling you from the top of the world,” Leigh Anne Drake quoted her son as saying.

He was climbing with his father and three Sherpa guides. The previous record was held by a Nepalese boy of 16.

The 13-year-old has now conquered the highest mountains on six of the world’s seven continents.

He climbed Africa’s Mount Kilimanjaro aged 10. He just needs to scale the Vinson Massif in Antarctica.

He has also scaled Mount Kosciuszko in Australia.

The team set off from Nepal’s capital, Kathmandu, last month, heading for the base camp on the Chinese side of the mountain.

While Nepal insists that anyone planning to climb Mount Everest must be 16, China does not impose any age restrictions.

Some mountaineers have criticised the Romero family for letting him attempt the feat but his father said the ascent from the Chinese side is less dangerous, the AFP news agency reports.

Last month, his mother told the BBC he would do some school work during the trip.

Also on Saturday, Apa Sherpa, 50, climbed Everest for the 20th time, surpassing his own record.