How did St Paul’s survive the Blitz? 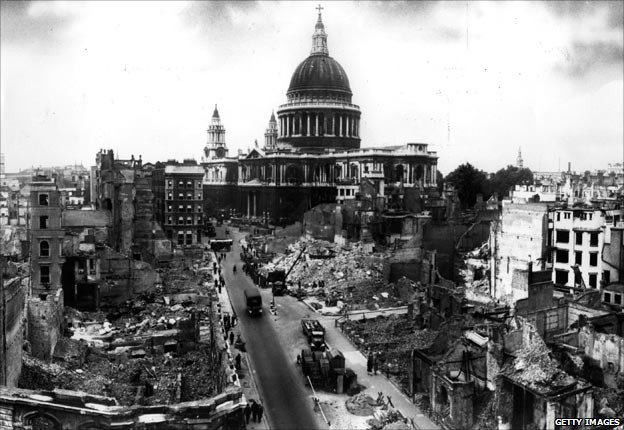 There was an unofficial lull in the Blitz attacks on London, for Christmas in 1940. But by 29 December, the German bomber planes had returned with renewed vigour. St Paul’s Cathedral famously survived, but how?

It became known as the Second Great Fire of London – the night 70 years ago that devastating air raids turned the capital into a conflagration. 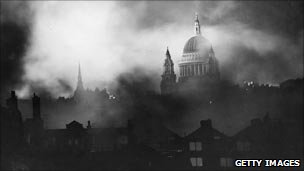 It had been a Christmas underground for many people, who slept in Underground stations or festively-decorated air raid shelters. For two nights, the bomber planes had not come, and the anti-aircraft guns remained silent.

That peculiar silence had already been broken as dusk fell on 29 December. The enemy aircraft had returned, dropping incendiary devices and parachute mines in many tens of thousands. Their target? The City of London.

By 1830 GMT on that cold Sunday evening, the Square Mile was in flames. Banks, offices, churches and homes were under threat, in the same streets burnt to a cinder in 1666. A US war reporter based in the city cabled his office: “The second Great Fire of London has ­begun.”

Prime Minister Winston Churchill sent word that St Paul’s Cathedral should be protected at all costs – it would boost morale to save Christopher Wren’s masterpiece.

But there was a hitch – a major one. Water was in short supply. The mains were being bombed, and although hoses could be filled from the nearby Thames, it was at an unusually low ebb – and unexploded bombs lay in the mud.

Nor was that the only threat to life and limb. Bombs, embers and debris rained down on the streets as they raced to battle the flames.

Christmas in the Blitz 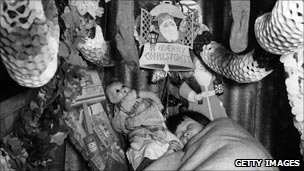 Fireman Sam Chauveau was on duty that night. “By the time we finished tackling the fires on the roof of the [Stock] Exchange, the sky, which was ebony black when we first got up there, was now changing to a yellowy orange colour. It looked like there was an enormous circle of fire, including St Paul’s churchyard.”

Bombs rained down on the cathedral. Volunteer firewatchers patrolled its myriad corridors, armed with sandbags and water pumps to douse the flames.

At about 2100 GMT, an incendiary device lodged on the roof, and the burning mercury inside began to melt the lead of the iconic dome. But luck was on the side of the firewatchers. The bomb dislodged, fell to the floor of the stone gallery, and was smothered with a sandbag.

But many more buildings were lost. Tram lines and water mains were destroyed, and the streets strewn with rubble. A dozen firemen died that night, and 162 civilians also perished. Those who survived firefighting duties suffered burns, eye problems and smoke inhalation.

The story goes that Air Marshall Arthur “Bomber” Harris, surveying the damage, remarked, “Well, they’re sowing the wind.” It was under his lead that RAF Bomber Command wreaked firestorms upon German cities. Before a 1,000-plane raid on Cologne, he told the newsreel cameras: “Now they are going to reap the whirlwind.”