B1 reading history and climate changes from trees 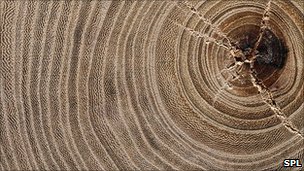 An extensive study of tree growth rings says there could be a link between the rise and fall of past civilisations and sudden shifts in Europe’s climate.

A team of researchers based their findings on data from 9,000 wooden artifacts from the past 2,500 years.

They found that periods of warm, wet summers coincided with prosperity, while political turmoil occurred during times of climate instability.

The findings have been published online by the journal Science.

“Looking back on 2,500 years, there are examples where climate change impacted human history,” co-author Ulf Buntgen, a paleoclimatologist at the Swiss Federal Research Institute for Forest, Snow and Landscape, told the Science website.

The team capitalised on a system used to date material unearthed during excavations.

“Archaeologists have developed oak ring width chronologies from Central Europe that cover nearly the entire Holocene and have used them for the purpose of dating artefacts, historical buildings, antique artwork and furniture,” they wrote.

“Chronologies of living and relict oaks may reflect distinct patterns of summer precipitation and drought.”

The team looked at how weather over the past couple of centuries affected living trees’ growth rings.

During good growing seasons, when water and nutrients are in plentiful supply, trees form broad rings, with their boundaries relatively far apart.

But in unfavourable conditions, such as drought, the rings grow in much tighter formation.

The researchers then used this data to reconstruct annual weather patterns from the growth rings preserved in the artefacts.

Once they had developed a chronology stretching back over the past 2,500 years, they identified a link with prosperity levels in past societies, such as the Roman Empire.

“Wet and warm summers occurred during periods of Roman and medieval prosperity. Increased climate variability from 250-600 AD coincided with the demise of the western Roman empire and the turmoil of the migration period,” the team reported.

“Distinct drying in the 3rd Century paralleled a period of serious crisis in the western Roman empire marked by barbarian invasion, political turmoil and economic dislocation in several provinces of Gaul.”

Dr Buntgen explained: “We were aware of these super-big data sets, and we brought them together and analyzed them in a new way to get the climate signal.

“If you have enough wood, the dating is secure. You just need a lot of material and a lot of rings.”

A2-B1 Celebrating the New Year with the future tense

1- This year will be different from the last.

2- A la forme négative, will devient will + not : forme pleine

I’ll get serious = I will get

I will give back to society : je donnerai en retour à la société.

I’m gonna eat right and cut out the junk.

I’m going to eat right and cut out the junk.

I will show more love to my family.

I won’t chat in class.

I will enjoy life and help others.

I will speak English more often.

I will play more sports.

I will  do more my homework.

I will read more.

I will set the table every day.

I will read a book every month.

I will tidy my room more often.

I will go on working  hard at school and get better marks.

In the future, I will keep fit, drink water and walk every day.

I will eat right  and cut out the junk food.

I will eat fruit and vegetables and I will exercise more.

In the future, I will work hard at school.

I will become an electrician and won’t be hurt.

I will become a carpenter.

I will become a police woman.

I will become  a tourist on one of our planets…

I will be a  star with lots of children and a family.

I will become the best sportsman on the moon.

I will skate on the moon.

I will be more friendly with my friends.

I will tidy my bedroom because it is messy.

I will be friendly with my friends and be polite!

I will become Prime Minister.

I will become The President of Europe!

I will become a farmer.

I will surf on Mars.

I won’t have any accidents.

I will become an astronaut.

I will become a designer of clothes.

I will become a vet.

I will be more organized.

Yes, I can revise my verbs and enjoy doing so!