Once upon a time, there was…

The Pea and the Princess adapted from its original version.

Once upon a time there was…a Prince but he wanted a Princess.

He travelled around the world but there was always something wrong.

-“There must be a real Princess for me somewhere!” he thought.

There was always something wrong and Our Prince  could not find one.

One day, there was a terrible storm with thunder and lightening.

In the middle of the storm, something happened and a Princess appeared but the Old King did not believe the Princess nor did the Prince. They thought she was not a Princess because of her appearance.

-“We shall see if you are  a real Princess!” (On va voir si vous êtes une vraie Princesse!”)

She put 20 mattresses and twenty feather-beds. And she put a pea under  the mattress or mattresses.

-“How did you sleep last night?”

-“I slept terribly bad!”... she said. “I hardly closed my eyes and my body is all black and blue.”

So the Prince was sure she was a real Princess.

The pea was placed in a museum!

Everybody can see it now!

My conclusion about Andersen’s tale?

Once upon a time=

to travel around the world= 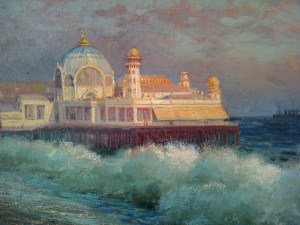 I can describe a poster 6°7

‘ The lady is Iranian. She comes from Iran. She is wearing a scarf on her head.’= elle porte un foulard sur la tête

She is walking in the street= Elle marche dans la rue.

She may have family problems= elle a peut-être des soucis familiaux.

The title is ‘Separation’.

Midnight in Paris by Woody Allen

We can see a street in Paris. A man is walking by the river La Seine.

We can see= on peut voir.

She is a Lady by Tom Jones