He is the first character in the series of novel from Thomas Harris who first introduced the character of Hannibal Lecter in his novel written in 1981 Red Dragon. Lecter is a serial Killer not like the others because he eats his victims he is a cannibal. In the two first novels Lecter is seen as an antagonist but in the third one he becomes a protagonist and in the last novel called Hannibal rising we learn how he became a serial killer. All his novels about Lecter were adapted in films, the first film was called Manhunt (it was based on his first novel Red Dragon) the film was released in 1986 and featured Brian cox but isn’t considered as part of the tetralogy. In 1991 it is Anthony Hopkins who plays the role of the serial Killer in The Silence of the Lambs He even wins an award for this role. he will also play the role of Lecter in the three other movies to come which are Hannibal released in 2001, the prequel of The silence of the lambs and Hannibal called like the first novel of the serie Red Dragon released in 2002 it was not considered as a remake of the first film Manhunt and finally Hannibal Rising released in 2006. Dr. Hannibal Lecter is someone who is Characterized by a certain class and great Knowledge. When you see him he seems to be a respectable man: cultured, intelligent a man with manners but this mask hides a dangerous murderer.

Here there is a video in which we can see Anthony Hopkins speaking about the character Hannibal Lecter.

I have choosen to talk about the famous novel named Robinson Crusoe because this novel is to my mind ( and as we mentioned it in class) the original model for Voyage and Return Stories.

Robinson Crusoe is an adventure novel by Daniel Defoe and published on 25 april 1719. The full title of the novel is The life and the strange and surprising adventures of Robinson Crusoe.

Robinson Crusoe is a fictional character created by Daniel Defoe. He was born in York in England in 1632. But he leaved York in 1651 to navigate against the wishes of his parents. His ship was arrested by the pirates Sallee Rovers and Crusoe became a slave of a Moors. He succeed to escape thanks to a portuguese ship.

In 1659, he joins an expedition in search of African slaves. But in the wake of a storm he is wrecked in an island near the mouth of the Orinoco river. He is the only survivor. In his new life, he builds, cultivates, manufactures, read the Bible but he also raises goats. Only the company of men missing.

The island is named « Despair Island » and it receives the visit of cannibals who come to kill and eat their prisoners. Crusoe wants to exterminate them but they don’t know that their acts are criminals. He dreams of having one or two servants. One of them succeed to escape to the prison. Crusoe and him become friends and he decides to name his new friend « Friday ». He teaches to him English and converts to Christianity.

28 years after, an English ship arrives and a timer just burst; the rebels aim to abandon the captain in this Island. But the captain and Crusoe manage to take back the ship and return in England with Friday who stay a devoted servant. He becomes rich thanks to his plantation, then he travels in France and finally he returns in England.

When I was a little girl, my grandmother read me The tale of Peter Rabbit, and others, written by Beatrix Potter, with her watercolor paintings. Indeed, B. Potter was, not only a writter famous for her stories for children, but also a naturalist who liked to draw landscapes and of course animals. The stories about the animals she’s written, personify the animals like « human beings ». For exemple, they talk, they clean their home with a broom…

The book I prefer of Beatrix Potter is The Tailor of Gloucester, in which little mouses make a suit to serve the tailor who feed them and who is sick. I remember that the Potter’s universe makes me dream. You should discover this wonderful world! 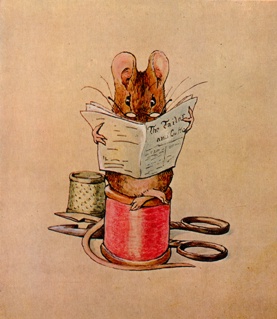 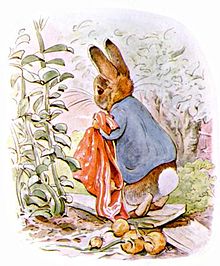 Treasure Island by Robert Louis Stevenson is a british novel published in 1883. This novel are intended for children but is interesting because it reminds the voyage and return stories, but this novel is qualified like a coming of age story.

the plot is very simple Jim the main character is a young boy (15-17 years old) and he lives in a inn. One day a pirate at inn receives an black spot, and among pirate it means that it will soon die. After few days the pirate dies and Jim with his mother find a key on the pirate’s body. in his bedroom they find a safe. Inside the safe there a map which shows a treasure island. And Jim decided to go on the ship at the search of the treasure.