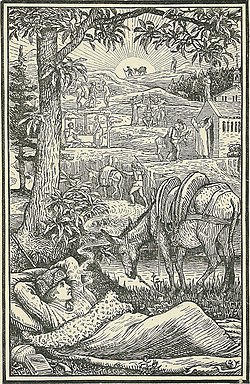 Since we started to talk about Journey literature in class, I’m here to write about one of my favourite book of this type. It has been written in 1878 and released in 1979. The author is Robert Louis Stevenson was born in 1850 and is well known for his other works like Treasure Island, Strange case of Dr.Jekyll and Mr. Hyde. He was 20 years old when he wrote this book : R.L Stevenson, one day decided to make a trip in France to escape his life that is quite complicated in Scotland (his parents don’t approve his relationship with Fanny Osbourne who he wants to marry). He starts an hiking journey in September, the 22th in Le Monastier and finishes in St-Jean-Du-Gard in October, the 3rd. In this story, we follow the author through his journey, describing things he sees, people he meets. We have to know that the Cevennes were a Protestant insurgents territory in 1702, called the Camisards. Thanks to this book, we discover their history and the relationship between them and Catholics.

I really liked this book although the fact that the main plot is not really thrilling, it’s a linear story without plot twist. But it’s a real poetical and relaxing reading ; the author successes in making the reader travelling with him thanks to the description of the landscapes,the architecture and his point of view about the civilization that he meets. But I noticed that the book doesn’t follow the usual pattern of travel stories ; there’s no phase of fear or nightmare, moreover the character is not really isolated except one or two times when he has to sleep outdoor. But it’s a real psychological travelling book : at the beggining, the author feels really ill at ease because of his personal issues and his health issues but at the end he feels relieved and his mind is clear.

A lot of people don’t know this work and I think that it’s too bad because it takes place in real places in France (GR70) where you can hike and follow his path, this is what I did and I have to say that it was an incredible experience, like if you were the main character of the book and you lived the adventure. Sometimes, I stopped next to some places and realizes that the author stayed here and met people of the village. It’s really an unique feeling.

Hope you will read it because it’s really worth it.