The film was released in 2015 and was inpired from the fairy tale cinderella the plot is about a young girl called Cinderella who losses her parents one by one her mother dies first and before to die she learns her the two most importants things to know which are to have courage and to be kind,and her father some years after his wifes death decides to marry again and later dies during a travel.Her stepmother and her two step sister’s are making of her life a real nightmare. Ella has to handle all the housework and her only friends are three mouses. Her step sister start to call her cinderella because one day she sleept next to the fireplace and had ash on her face.one day she meets the prince during a hunt and the prince falls in love, the king want’s to find a queen for his son before he dies so that’s why he want’s to organise a ball but his son tells him that there will be a ball under one condition, he wants to invite every women in the kingdom so that he can meet the young girl again.Ciderella’s stepmother has not allowed her to go to the ball, once she is alone her godmother appeares and will help her realizing her dream.

Here is the movie trailer

I would like you to see the film Broken Arrow directed by Delmer Daves in 1950 because it’s really a beautiful film on a black period in the USA History.
It is inspired from a novel written by Elliott Arnold, moreover this is a true story that occurred in 1870.
In 1870, Jeffords, after a demobilization, was called to Tucson to be the superintendent of a mail line that later became a part of the famous Pony Express system. After some of his mail riders were killed by Apaches, he rode alone  into the camp of Cochise to parley, without arms and a white flag in his hand . This bravery  impressed the chief so much that he became friend and blood brother to Jeffords, accepting that his mail riders crossed the area safely.
James Stewart embodied Tom Jeffords and Jeff Chandler Cochise.The film was shot in Sedona, the famous area in Arizona where numerous Hollywood’s films were shot because of the beauty of its red rocks.
But the true story took place further south in the Dragoon mountains where Cochise, the famous Apache war chief lived. 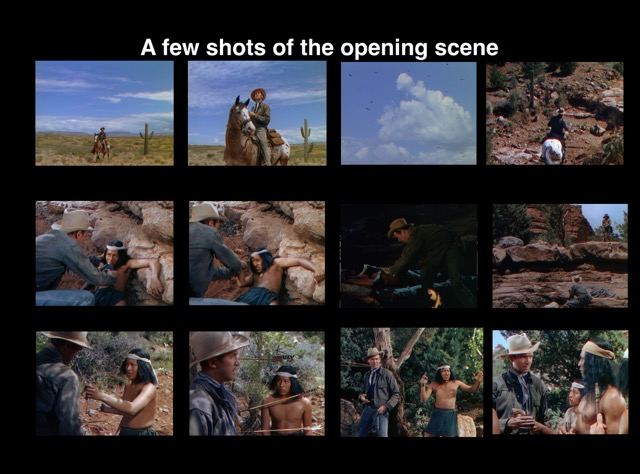 James Stewart’s voice over introduces the film. He explains that he was prospecting for gold when suddenly some buzzards circling in the sky suggested him that there was some trouble in store.
These first shots are very interesting. Let’s go and compare the 4th  and the 8th :
in the 4th one, Tom Jeffords on his horse in the foreground is placed over the Native who is seen as a victim. This is a high angle shot, whereas in the 8th one the Native is over Tom Jeffords and is seen through a low angle shot. Paradoxically Tom Jeffords doesn’t take advantage of his superiority in the 4th shot and decides to attend the young Native who is wounded on his back (that underlines how cowardly those who tried to kill him were…) .
Paradoxically the young Native American doesn’t take advantage of his superiority in the 8th shot and decides to give Tom Jeffords a gift gratefully and to protect him against his own tribe.
It illustrates very well how the film is going to deal with the birth of an incredible friendship between Tom Jeffords and the Apaches.
Tom Jeffords noticed that the Native Americans were generous, grateful, loyal, that they had the sense of honor,  that they indeed shared very important values with Tom Jeffords
Unfortunately all American people were not like Tom Jeffords at that time, and Delmer Daves definitely wanted to pay  tribute to this man who tried to understand Native Americans.