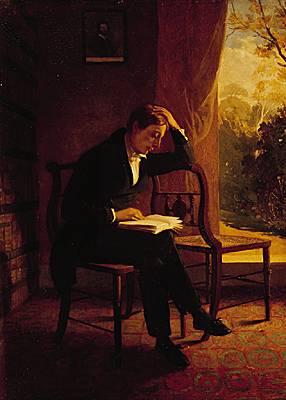 I would like to talk about John Keats an English poet that I like. I don’t know if you know him. John Keats was an English Romantic poet. He was born near to London in 1795 and died in 1821 in Roma. He is considered as one of the main figure of the second generation of Romantic poets in England whose takes part also Lord Byron Percy Bysshe Shelley who became his friend. However, during his life, his works were not well perceived by critics, even despised. Indeed, his works were published only four years before his death. He is perceived as a cursed poet because he died too early, suffering of tuberculosis, knowing the glory really only after his death. Tom Keats, his brother also died of tuberculosis. It’s at that time that he started to have symptoms. At that time, he met Fanny Brawne, a 18 years-old girl with which he fall deeply in love. In 1819, they get engaged but they couldn’t get married: the poet died before. In order to have an idea of his talent, I can quote one of his poems :

Four Seasons fill the measure of the year;

There are four seasons in the mind of man:

He has his lusty Spring, when fancy clear

Takes in all beauty with an easy span:

He has his Summer, when luxuriously

To ruminate, and by such dreaming high

Is nearest unto heaven: quiet coves

His soul has in its Autumn, when his wings

He furleth close; contented so to look

Pass by unheeded as a threshold brook.

He has his Winter too of pale misfeature,

Or else he would forego his mortal nature.

Jane Campion, film director, directed Bright Star in 2009 which pays tribute to Keats’s lives and his relationship with Fanny Brawne. Jane Campion is above all known for her film The Piano, released in 1993 which won the Golden Palm during the Cannes Film Festival. I really advice you to see Bright Star. I think it’s really good tribute to the poet. It’s really moving and gripping. It’s a really poetic film. What I really like, it’s that Jane Campion choose to quote some of Keats’s poems during the generic. The film title refers to a sonnet written by Keats when he was with Brawne:

Bright star, would I were steadfast as thou art—

Not in lone splendour hung aloft the night

And watching, with eternal lids apart,

The moving waters at their priestlike task

Or gazing on the new soft-fallen mask

Of snow upon the mountains and the moors—

To feel for ever its soft fall and swell,

Awake for ever in a sweet unrest,

And so live ever–or else swoon to death

Well, I really advice you to read some of Keats’s poems and to see the film of Jane Campion. If you like Pride and Prejudice, directed by Joe Wright, you may like this film.