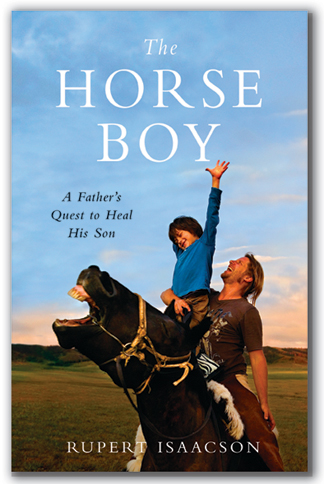 Rupert Isaacson is an equitherapist, a writter, a film-producer and a journalist. He was born in 1967 in London, England. He divided his time between the United-Kingdom, the United-States and Africa, his continent of adoption. He was a journalist, who worked for many newspapers such as The Daily Mail, The Daily Telegraph (…) and also the National Geographic in America. He fought alongside Survival International for the recognition and the rights of South-African Aborigal. He also created a foundation for the right to land of this population, and published in 2008 a book entitled The Healing Land : The Bushmen and The Kalahari Desert.

The Horse Boy is a book written by Rupert Isaacson and published in 2009. It is an autobiographical novel that traces the story of the author mainly during his journey in Mongolia with his wife to help his 5-years-old-autistic son, Rowan to open up to the world surronding him. Rowan was diagnosticated autistic when he was 2. As the result of this diagnostic, his parents, Rupert and Kristin understood the unusual course of action of their son. They didn’t know how to behave with him, until they discovered that Rowan was improving in contact with animals, especially with horses. Each time that he was riding a horse, he made progress. For instance, a crazy idea crossed Rupert’s mind : he wished to leave Texas to organize a trip in Mongolia, travelling across the country on horseback, looking for Shaman and healers. He also choose this country because of the equine history.

A film crew followed Rupert and his family in Mongolia, for making a documentary about this crazy excursion to « heal » an autistic boy. It was directed by Michel Orion Scott and Rupert Isaacson. The documentary retraces the life and the evolution of Rowan during his path halfway around the world. It was also released in 2009.

Here is the trailer :

This work allowed me to learn more about autism, the « specific » behaviour of autistic people... Unfortunately, an autistic person will always live with autism. This disease can get better over time : we have to stimulate an autist by many ways. Thanks to the determination of his parents, Rowan has evolved, but that is not finished : he will continue again and again. He got rid of some habits such as violent temper tantrum. Now he can flourish within his family.

Thanks to this novel, it enabled me to understand the animal behaviour and particularly about the horses in contact with people and autistic persons. I also learn about shamanism, and open myself to this spiritual world. It was really interesting to see how the healers were proceeding during a ritual. And now, I really want to travel in Mongolia, to see the steppe as far as the eye can see and magnificent landscapes ! Besides, Mongolian really seem to be welcoming and friendly...
To conclude, I just have to say that I look up to the determination and the courage of this parents, to go as far to help their son and I think they have to be proud of them, because what they have done it is almost inbelievable.