Let it be said, let it be done.

Now it’s time for me to talk about the book that shook the world ! This new phenomenon is the Harry Potter new play. 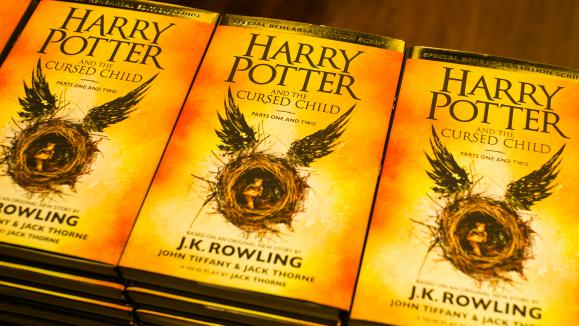 Don’t worry, for sure I won’t spoil you, I’ll just give my opinion (as we know it’s not the truth x’D) as a reader, a Potterhead and just as me. Or some aspects of the story… In fact you’ll see a few lines under.

It was written by J.K Rowling (if you don’t know her, shame on you !), Jack Thorne & John Tiffany. So, so, so let’s point out that first : because of these different authors, as you can guess, that’s not completely as « Harry Potter » as it was with Rowling’s books. The story generally was interesting but sometimes, I  was like « would really this character say so in the books ? » or « is it really the Harry -or someone else- I used to know ? ».

So yeah sometimes that was disturbing for me but I thought that the main playwright was Thorne, and he isn’t our J.K Rwoling. Therefore I & you can understand these differences.

About the story, the main action is time-travelling thanks to a Time-Turner, if you read the book (what you should do anyways) you’ll see. This object is present all along the story ; it plays a very important role. So because of time-travelling some details can change… If you try to prevent someone from dying, maybe that’s someone else who’s going to die. I drew a conclusion of all of this : we should not travel back in time. It’s too complicated and dangerous, but that’s what the characters understood before me, of course ! And last but not least that’s impossible for the best, and for the worst…

Then seeing alternate reality was really interesting though, I really liked it. If you do like these kind of stories about time travel, time machine, timelines, you’ve go a very good and interesting anime called « Steins ; gate » about the science of travelling in time. That’s freaking well-done and the only thing about science I like 😉

Finally if you love Harry Potter, of course you’ll love & enjoy this play but be ready for something different. However we still have a lot of humour, you won’t  be rolling on the floor laughing but that’s nice. Ah ! An important point : you can read it in english (I wanted to read it in english first but seeing that the english version was less expensive than the french one… Of course I took it) there isn’t a very complicated vocabulary so this book is not out of reach if you have a good level (just like all HP books).

There it is, now it’s time to come back to Les Faux-Monnayeurs… Good things always have an end ! ;’)