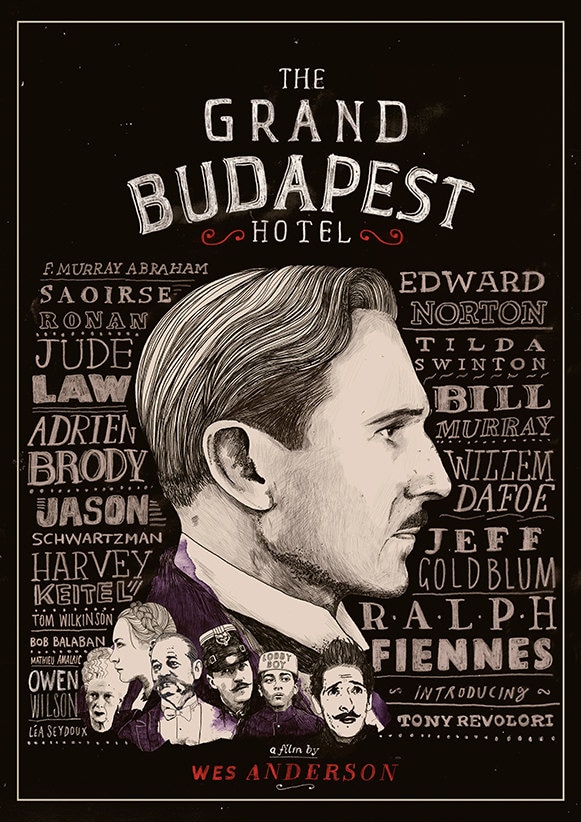 Have you ever heard of the film director Wes Anderson? Or have you ever watched one of these movies: The Royal Tenenbaums, Moonrise Kingdom, the Darjeeling Limited or the eponymous animated feature Fantastic Mr Fox based on Roald Dahl’s book… I am sure that if you did see one of them, you remember it for sure! He may have one of the most distinctive visual styles a popular American film director has ever had, which led to many parodies reproducing his unique work… For instance, he seems to be obsessed with symmetry and unique colours. The sceneries he imagines are always very colourful and look as if we just entered a magical fairy tale. Moreover, critics and writers, as well as Anderson himself often refer to his films as  « self-contained worlds« . The characters of his films always behave in a totally exentric way and have amusing but weird characteristics, as much physically as intellectually. But here is a warning: if at first sight, his movies just seem to be wacky comedies, they are actually more meaningful than that and marked by melancholic elements. His recurring themes are often grief, loss of innocence, parental abandonment, suicide, adultery, sibling rivalry…Don’t simply rely on the seemingly shallow lines, you should find the lines between the lines!

The Grand Budapest Hotel is one of his latest films and I really enjoyed watching it! It is the kind of movies you should watch when you are sad, sick or depressed: it will make you laugh a lot, cry of laughter and laugh some more…And then feel a bit melancholic?

Wes Anderson creates a brand new world with a special atmosphere. The landcapes and aesthetic choices he makes are truly worth-watching! To sum it up, I could simply say that we follow the adventures of a legendary concierge, played by Ralph Fiennes, and known as Mr. Gustave H. He is in charde of a great hotel located in the city of Nebelsbad, in a fictional Central European state called Zubrowka, between the First and the Second World Wars. Known to court aging wealthy women who flock to the Grand Budapest Hotel, we get to know Mr. Gustave through the eyes of a trainee lobby boy, Zero Moustafa. Freshly arrived in the country after his hometown was invaded and his family executed, his most important mission is to give Mr. Gustave his precious fragrance, « L’air de Panache ».
Their life is quite comfortable until one of the concierge’s octogenarian guests, Mrs. (take a deep breath) Céline Villeneuve Desgoffe und Taxis, also known as « Madame D » or even Madame C.V.D.u.T, is found murdered..

.Both of them will meet Agatha, a resourceful pastry chef, with whom Zero will fall in love.

They will also try to keep a mysterious painting called  » Boy with Apple » that everyone has their eyes on, they will be lockep up in an Internment Camp, playing a game of hide and seek in a monastery, chased by a cold-blooded assassin with a sledge, be involved in a chaotic gunfight inside of the hotel…Through plenty of twists and turns, Zero will become Mr. Gustave’s more trusted friend.

This shooting script reminds us of a book, and it’s exactly what Wes Anderson wants us to think. He was inspired by the author Stefan Zweig’s work and this whole story is actually told by an older Zero Moustafa to a famous writer -played by Judd Law-. The former lobby boy is now the director of a shabby and empty version of the Grand Budapest Hotel, several decades after the end of the Second World War. He still visits his hotel now and then, to immerse himself fully in his memories. A deep scent of nostalgia emanate from the Prologue and we figure out, that if what we just saw felt like something magical but artificial, it now makes sense. The Grand Budapest Hotel seems to be an idealized, beautiful memory shared with the Young Writer, who will die. A Young Girl can be seen in front of his grave with a book of his. So, the story is a memory of Zero, whose audience is The Author as a young man. He then remembers it as an older man, whose audience is both us (as he talks directly to the camera) and the girl reading the book, and whose audience, finally, is no one else but us. It could be a beautiful metaphor of memories to cherish, as everything and everyone is going to die one day, but it also brings a bit of hope, as it can be remembered for a long time.

Do you know any of Wes Anderson’s other movies? If so, what did you think about it? ?