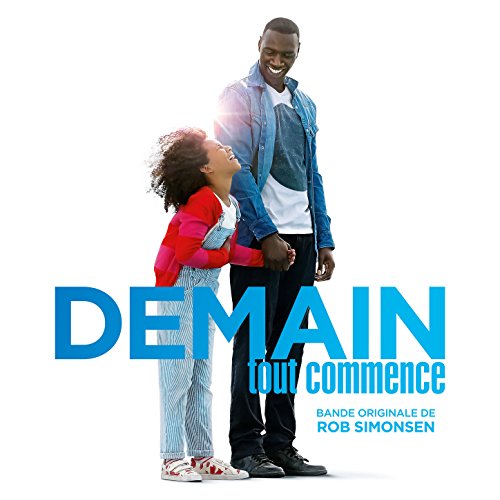 Hey everyone ! Recently, I saw Demain Tout commence, a French comedy-drama directed by Hugo Gélin and released in December 2016. The main characters are played by Omar Sy, Gloria Colston and also Clémence Poésy.

It’s a dramatic story about Samuel, a young man who is working in the South of France, near the see : He has an easy life without any importants problems until Kristin, from London, one of his old girlfriend  comes back and announces him that he have a daughter, gloria, still a baby. The problem is that Kristin leave the beach and left the baby behind her.

Samuel, who has any experience as parents-being will going to London to find her, but in vain. Finally, he will live in London, educate and make his daughter grow up alone, give her all his love and become a stuntman. However, Gloria wants to know her mother : Samuel sent her fake e-mails with a fake Mail Adress (with the Kristin’s name), and make her think that her mother is writing her.

But after 8 years, Kristin comes back and wants to gets her daughter whereas  she wasn’t present the last 8 years. We learn that she met somebody else and started a new life.

Subsequently, numerous problems will be added : Gloria is suffering from a severe Heart disease and has 4 years to live. At the End, we learn a tragical news : Samuel is in fact not the Gloria’s father.. At this moment, the world around him collapses, and nothing more exists.

I found this story really sad and dramatic : Indeed, although Omar Sy plays ordinary funny roles, he is also really good in drama movies : At times, it’s really touching, For instance when Samuel and Gloria are together, we can see that he is giving her all his love, the actors  almost looks like  real relatives !!

Although it’s a dramatic movie, there is also Funny’s moments, which give a real interesting side to the story and made us like this even more.

I really found it good and I advise it to you !

Have you already seen the movie ? 🙂