The Secrets of the Immortal Nicholas Flamel written by Irish author Michael  Scott. It is a specialist Mythology and folklore, he wrote a lot of science fiction, fantasy and horror books and in Ireland, he was called the « king of fantasy ». I am going to talk about the first book in this series:  The Alchemyst .

The story begins with two siblings, they are twins, the first; her name is Sophie Newman , who she works in a tearoom  and the second  his name is Josh Newman, who works in the book store, where the owner is  Nick Fleming and his wife Perry Fleming. One day while Sophie is on the phone with her friend, she sees a black limousine which stops in front of the book store where his brother works. And several men in black come out of the car to attack the owner of the bookstore.The two twins witness a supernatural power fighting between Nick Fleming and the men in black who are golems controlled by John Dee. After the fighting, Josh and Sophie discover that Nick Fleming is Nicholas Flamel the famous and historical French alchemist: 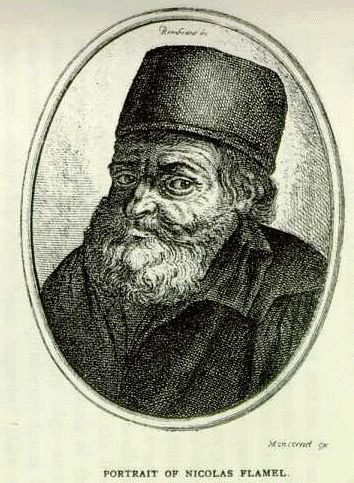 Nicolas Flamel has a reputation of an alchemist who search the philosopher’s stone and the immortality. And John went in the book store to steal  Codex, where there is Final Evocation but Josh ripped off the two pages that explains the final Evocation, so the two twins are in danger, because John Dee would like to recover them.

Along their journey the twins will discover the existence of some sort of gods call “The Elders”. Some are nice but other who are called “Dark Elder” are cruel and John Dee wants to wake up them for they control the world. Nicholas Flamel will find help with an Elder who she is the Celtic goddess of the war; Scathach and Hecate the goddess with three faces and together they will help the twins to wake up their power, because Josh and Sophie are the twins of an old legend.

I love this book because it mixes a lot of heroes or gods in different legends in the world, like Celtic or some Gods of Egypt or Prometheus and Shakespeare appears like an immortal human and he helps twins in their quest.