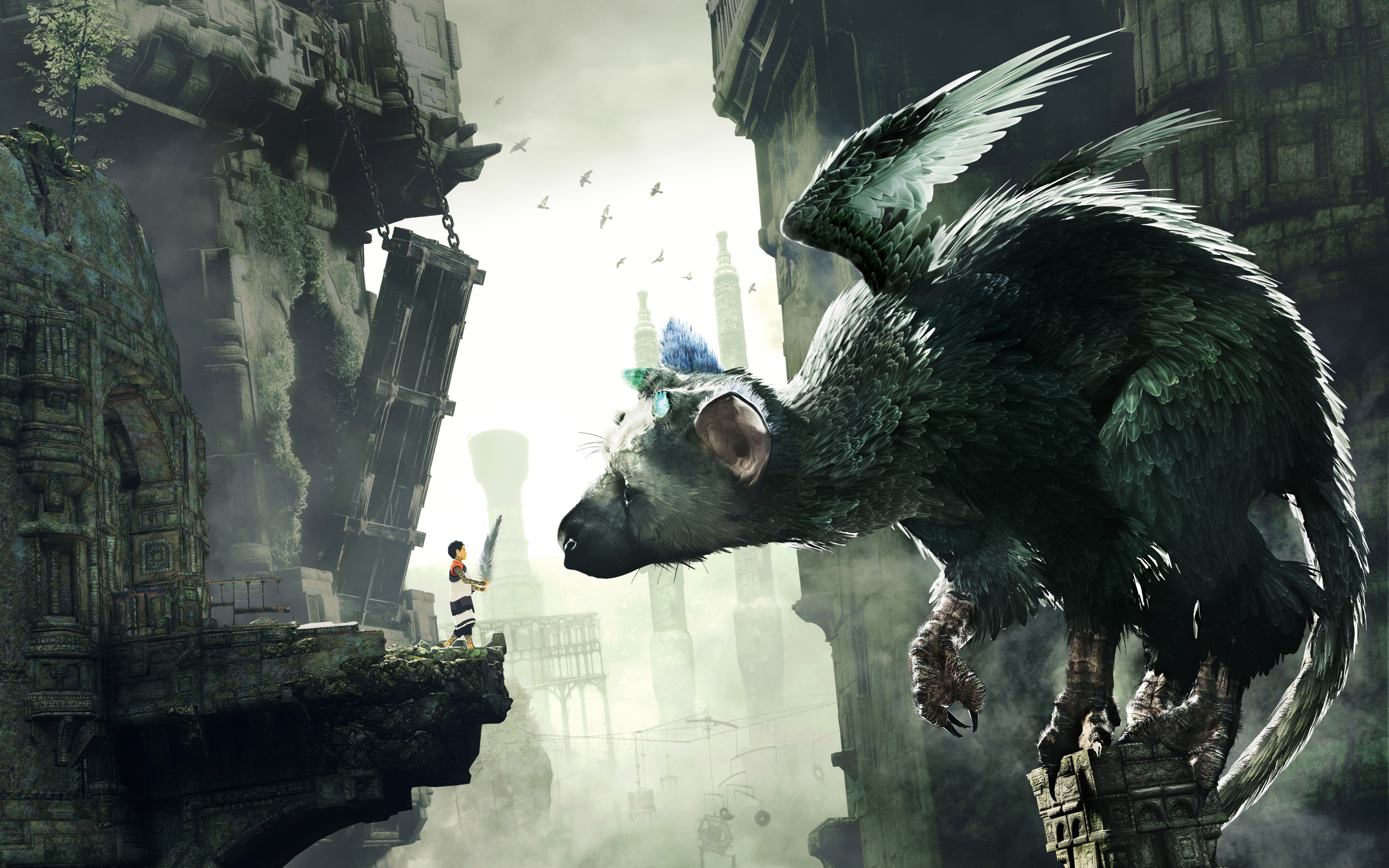 Hello guys, so today I won’t talk about a book, movie or song but about an incredible video game: The Last Guardian. Yes you heard me well, The Last Guardian is FINALLY out after all the looooooong wait!! 😀

The Last Guardian is a PS4 action-adventure video-game created by Fumito Ueda and developed by the Team Ico, a Japanese video game development team who has also developed the famous video game Shadow of the Colossus. I won’t talk about the whole story because I didn’t had the chance to play it myself, but I’ve watched the beginning on Jacksepticeye‘s channel (who is my favorite youtuber ever by the way ? ) but I still can talk about the plot that I know so far.

The game is based on a fashback narrative told by an old man recounting his experience as a young boy meeting a giant feathered creature named Trico who looks a lot like a griffin. This mystical creature is a mix between a cat/dog (the gesture), a bird (the wings, the feathers and the legs). The name of the creature probably came from the japanese words «  »tori no ko » which means « baby bird » in english or from the words « tori » and « neko » which means « bird » and « cat« . Trico is kind of magical since he can shoot electric lasers from his tail and he also have kind of small turquoise horns which appear to be very special and his eyes change color. The game start with a mysterious cinematic in which we can see an artifact half-buried in the ground, we can also hear children’s laughter and then a shadow who seems to be the little boy’s shadow appears on the artifact and it seems that the shadow has noticed the mysterious objet.

Then, the player can control the little boy who don’t speak english and whose name is unknown. The boy has been kidnapped « under mysterious circumstances » and taken to a huge ancient castle (yes there’s many mysterious things in this game, that’s probably why I already love it).

« I awoke to find myself in a strange cave. »

The little boy wakes up next to Trico:

« I noticed with a start I was not alone. Beside me lay a great man-eating beast— « Trico. »

He also wakes up to find tatoos on his body that he didn’t have before being kidnapped:

« I did not know how, why or when it had happened, but my skin was covered with peculiar markings.«

There’s a lot of questions left for the player, questions that need to be answered. The gameplay focuses on the relationship between the boy and the mystical creature. At first, Trico is very distrustful and aggressive towards us, but since we feed and help him (Trico is injured because of the spears stuck into his thighs), we end up to tame the creature. The player can also call Trico, it’s a way for the two main protagonists to understand eachother. This is how we gain Trico’s trust through the story.

So far, I really love this video-game, the graphics are gorgeous, the music fits very well with the environment, Trico’s design and gesture are incredibly well made and I also love the connection between the little boy and Trico which are, according to me, a great and unique way of communication.