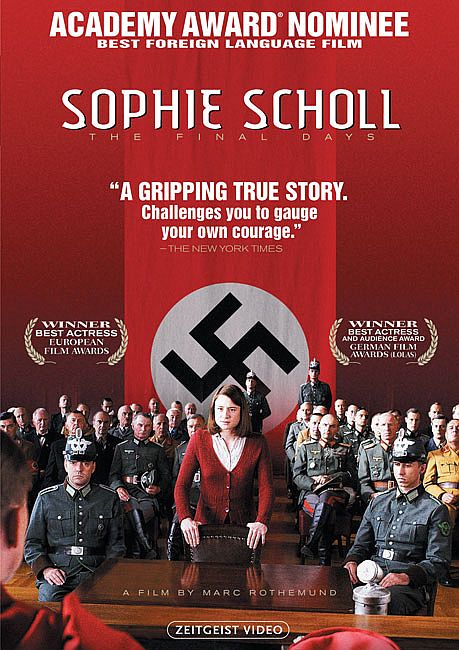 Sophie Scholl, The final Days, (Die letzten Tage in german) is a german film directed by Marc Rothemund, released in 2005. The movie was nominated at the Berlinale in 2005 and won Silver Bear awards for Best director and Best Actress concerning Julia Jentsch who plays one of the protagonist : Sophie Scholl. Even if there was no awards at the Oscar’s ceremony, it was presented as the Best Foreign Language Film.

Who is Sophie Scholl ?

Sophie Magdalena SCHOLL was born the 9 may 1921 in Fortchtenberg in Germany and was executed the 22 February in Munich.

She was one of the main leaders with Hans, her brother, of the Weiße Rose (translated by White Rose) , created in 1942 , a German resistance group against the dictatorship led by Hitler. Today, she’s an inspiration for the germans.

Based on Real facts, the plot is about the Sophie Scholl
and Hans Scholl’s life during the second world war in germany. We follow them into the White Rose Organization.

Their goal is really simple : Raise compatriots’ consciousness and fight in a passive way through leaflet distributed in Munich : However, whereas the siblings were handing out the flyers in the Munich University, they were arrested by the police.

Subsequently, they are asked by the gestapo investigator (political police during the Third Reich) about these flyers : Although Sophie denied being culprit, and told she was apolitical, the investigator doesn’t want to believe her and led her and Hans in the Jail waiting to her Trial.

Guily of High Treason, the Scholl’s siblings and Christopher Probst, a friend who is also involved into this case, are judged by Roland Freisler, the well-known german Judge, president of people’s court in the Nazi regime, who was held responsible of thousands and thousands death sentences.

As in the real life, the Freisler’s Actor plays the role of a very bossy, authoritative, nasty,ruthless man who does not carry of the accused. The Trials didn’t take a lot of time : Indeed, the judgment fell very quickly most of the time.

After having questioned the White Rose members students, the judgment falls : The execution of the protagonist. Whereas someone told to Sophie that she could have 99 days waiting to her killing, she will be executed the same day.

Before leaving the Court’s room, she said  :

“where we stand today, you will stand soon“

And the movie ends at her last words  :

( translated by ‘Long Live Freedom » which is not meaningless.)

I saw the Movie in VOSTA (Original Version with English substitles) and I found it really admirable as much by actor’s play as the adaptation of the real history facts. Indeed, we found the historical context of the second world war and the movie present Sophie and Hans as Heroes of their time : They made a lot to improve things during the Hitler’s dictatorship which led to oppression and Terror.

They fight against them in a passive way with a Resistance Group and entered in History like many other groups like Red orchestra, or Edelweiss Pirates. Unfortunately, all of these didn’t be active for a long time before be dismantled by the Nazis.

Through this adaptation we can see how was the situation in this time and how hard it was. The Original Version gives us a lot of shivers because of the Protagonist’s Anger, anxiety, and hopelessness face to the Totalitarian Regime which are accentuated in german (according to me).