In the last article I published I wrote about the series « Orange Is the New Black ». This series has inspired by the autobiographical book « Orange Is The New Black : My year in a Women’s Prison »  by Piper Kerman.

Piper Kerman is an American memoraliste. This autobiography tells her 15 months in a women’s prison. Moreover she tells about her love affair with Nora Jansen. Nora Jansen was a traficante drugs and she involved Piper Kerman in her trafic.

The series is very well and I think the book too. I find this book matches perfectly with the concept of autobiography.

« Orange Is The New Black » is a TV show directed by Jenji Kohan since 2013. There are 2 seasons and it’s « dramatic comedy ». Recently I’ve learnt this series is based on the autobiography « Orange Is The New Black : My Year in a Women’s Prison » written by Piper Kerman.
This series tells the story of Piper Chapman who is for 15 months in a women’s prison because 10 years earlier she had been carrying a drug case.  In this series the homosexuality and the place of women in society are present with humor and irony.

I love this series. I recommend it ! Moreover I’m going to read the autobiography written by P. Kerman. So I would like write an other article about this book and « Je de l’écrivain et jeu de l’écriture ».

Daniel Defoe was born in 1660.  He was adventurer, shopkeeper, politcian and writer. He wrote Robinson Crusoé. When he was young he doesn’t like write and prefer political and literature.
During his life, he meet Guillaume III and Robert Harley. In 1704, he is in prison because of « intelorance toward Anglican Church ». In prison, he has publish Weekly Review. After that, he lives with pseudonym « ’Alexander Goldsmith ». Afterwards he become outraged of political and he works everytime in literature :

In 1715, he has publish The Family Teacher  and in 1719 Robinson Crusoé. Especially, he has write in 1729 Magic System. Of course he published another books !

His books are testimony of economy, social, demographic and cultural development during the 18th century in England and Scotland. He died in 1731.

The Adventures of Tom Sawyer is the first novel of Mark Twain and published in 1876. This novel is humorous. It can be read by adults and childrens. There are 35 chapters.

It’s the story of Tom Sawyer, malicious and superstitious, with his friends Huckleberry Finn and Harper Joe. His adventures take place in the fictional town of St Petersburg, but from 13 to 17 chapters Tom and his friends are on desert island. Tom lives with his Aunt Polly because parents’ Tom are dead, whereas Huck lives in barrel. 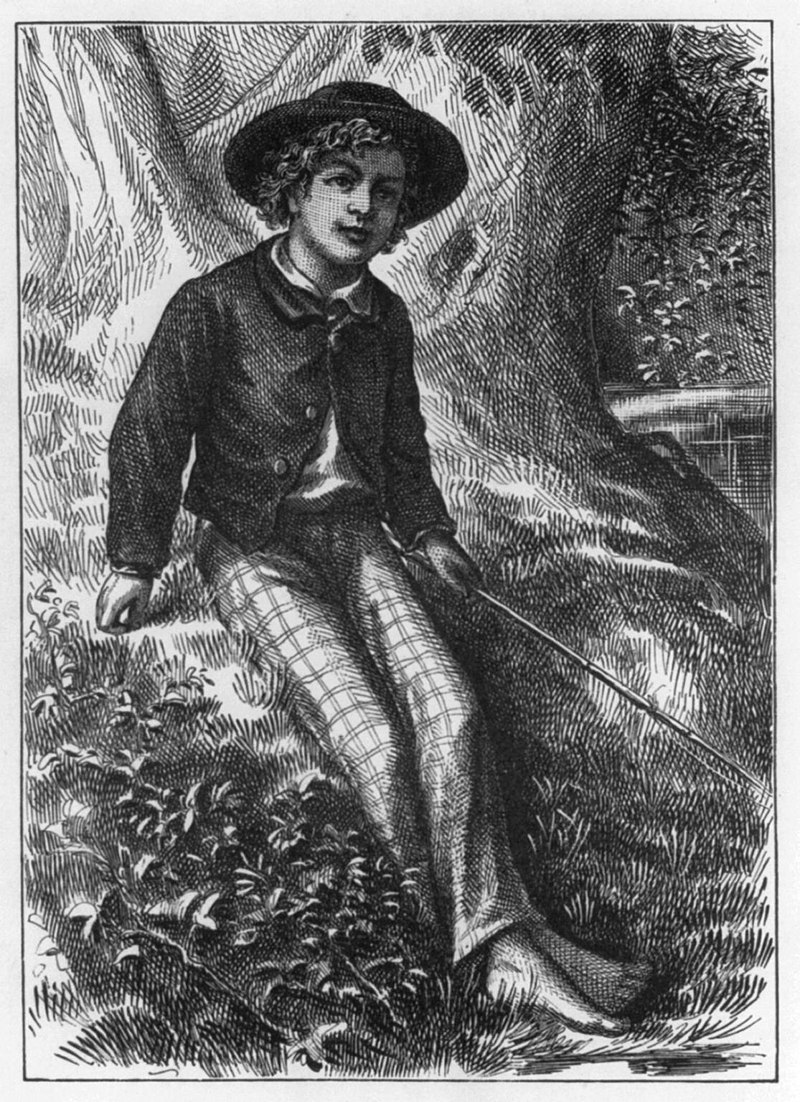 Last week I went to the Jazz Festival in Nevers. There are several concerts with different artists ! I find that interesting because there are many great musicians, it’s quiet a chance for us!
I saw Bigre!, Quatuor Béla and Jean Louis, ONJ, Bill Frisell, Jacques Schwarz-Bart, Omar sosa, etc but I will study on Kenny Garrett that I saw Saturday, 15 November. I love it !

Kenny Garrett was born on the 9th of october 1960 and is a saxophonist. He has become the preeminent alto saxophonist of his generation. His career begin in 1978 in Duke Ellington Orchestra. In 1984 he made her first album as leader. Now there are 11 albums which have been nominated in Grammy Awards ! He is also a composer and in his music there is maybe Asian influences. His personality and his musical  improvisation are surprising !

« Happy People », 2002, was played to the Jazz Festival in concert. It was amazing ! People was dancing in the concert room, I haven’t see this before. This music make me happy. Moreover, Kenny Garrett loves contact with the public ! At the end of this version (on Youtube) we can hear people who dancing and singing ! Music can be during 5 or 20min, there isn’t end. He is brilliant !

I watched this film and  it’s very good! « Gone girl » is an American thriller dating back to 2014 and directed by David Fincher (an American director and producer). Fincher is one of my favorite director with Wong Kar-way. His films are amazing!
So, « Gone girl » is a film with black humor and it’s satire of marriage and media. The film denounces the hypocrisy of American society idolizing appearances. It’s a beautiful film, very well filmed and with interesting script. The soundtrack is very nice. The actors are Ben Affleck (Nick) and Rosamund Pike (Amy).

Amy and Nick are a seemingly perfect couple. But one day Amy disappears. We think that she is abducted… or did Nick killed his wife ? It’s a leading thriller. I will not say because the truth is the charm of the film. I find the script is very clever because we have different point of view without knowing the truth.

In class we have studied « The great Gatsby » by F. Scott Fitzgerald and there are two films adaptations of this novel : In 1974 by Jack Clayton and in 2013 by Baz Luhrmann. The actors are different. In the film from Jack Clayton Gatsby’s actor is Robert Redford and Diasy’s actress is Mia Farrow. In the version of Baz Luhrmann it’s Leonardo DiCaprio and Carey Mulligan.
I prefer the film dating back to 1974 because there are more details and the actors are better ! Even if in the second film special effects and outfits are beautifuls.

And what about you ?  What is your opinion ?

During this years, we have discovered numerous texts and films in several theme. There are « The Hobit », « The strange case of Dr.Jekyll and Mr.Hyde », « The malteses Falcon », « Frankenstein », « Alice’s Adventures in Wonderland », « The Dumb Waiter », « Pride and Prejudice », « As You Like It » and other texts ! In class, we have also study differents authors as « Shakespeare », « Mary Shelley », « Jane Austen »… We have study very vocabulary as the gothic literature, humour and nonsense, poems or the literature of the absurd !

Since the beginning of the year, we have learnt so many thing. In my opinion I prefered the literature of the absurd and the fantasy ! And you ? What theme do you like ?

Clint Eastwood is an American actor, film director, producer and composer. It’s an actor and director very touching !
I love « Million dollar baby ». Maggie Fitzgerald, thirty one, want get in the ring. Franckie become her coach. A beautiful relation develops between them.
In this film C. Eastwood is also an actor and play very well. He plays the coach Franckie. I find this film really affecting and it includes several emotions. I recommend you !
I also seen « Mystic River » and it’s very intersting. It’s a drama : Jimmy is killed and an police investigation begin… The end is surprising and it’s a very good film ! I like this movie.
He did « L’echange » with Angelina Jolie (a great film).

Have you seen a film with or by Clint Eastwood ?

I think that it could be interesting to see diffenrents plays of Shakespeare ! You can choose several play of him in this selection :

I didn’t wrote all parts of Shakespeare but I hope that these items can help you !

I watched the film of « Pride and Prejudice » by Joe Wright and it’s a good adaptaption of the book. I haven’t read the novel who revolve about the importance for young women of find a husband. This story deals with five girls who should be married and around the relationship between Elizabeth and Mr. Darcy.
I find that Jane Austen portrayed with humor the behaviour of middle-class and upper-middle families and we can see that in the film this humor is present. So, the film a good adaptation of the novel. Moreover, the actors plays very well and they are in their character. Keira Knightley in the role of Elizabeth is good actress ! Also, the musics in this film are beautilful  as « Dawn ».

In class we watched Frankestein. The representation was very dramatic. We could understand what they said and the story. Helena Bonham Carter playing is very well. I find that she is a good actress. She plays always in films of Tim Burton and she is radiant ! She is also in « Frankestein ». Some scenes are sometimes long but this story is strange and interesting.
We have seen the play of Frankestein with school and the film. I can compare and I prefere the play of Frankestein !

Summary : Hester Jekyll is the niece of Dr. Henry Jekyll. Hester arrived in England to claim her legacy. She discovers that she gets nothing. So her friends are aloof. Hester discovers the mysterious past of her uncle and a series of brutal deaths. She wonder if anybody have seen Dr. Jekyll  or Mr. Hyde.

I haven’t read this book but I think that it’s interesting for the people who studies « The strange Case of Dr.Jekyll and Mr.Hyde ».