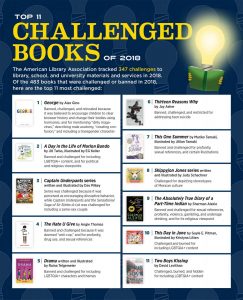 Read the list below, and compare it with the 2018 list on the left and the censorship data. What strikes you ?

Top Ten Most Challenged Books for 2017

The ALA Office for Intellectual Freedom tracked 354 challenges to library, school and university materials and services in 2017. Of the 416 books challenged or banned in 2017, the Top 10 Most Challenged Books are:

Now listen to the reaction of one of the banned authors (Dav Pilkey for Captain Underpants) on the video below.

What do you personally think ?

Browse the list again from top to bottom and choose any of these books. Do some extra research on it and its author if needed.

Then write your letter of support to your banned author, using the stationery provided.