…Wait! I know what you must be thinking just by seeing the title of this article…But you are wrong! The book I would like to talk about doesn’t have anything to do with its almost namesake, sulphurous book… You know, the one that you must have heard about…Yes, that one!… Maybe did you even read a few pages secretly?

So, let’s forget everything about that other one.
•This story takes place in 1941. Lina is a young Lithuanian girl like many others. Obsessed about Edvard Munch‘s work,she draws, she paints, she lives a comfortable life with her loving family and has just been accepted into one of the most prestigious art schools in Europe. Until the 14th of June. Her whole life stops: the NKVD, also known as the frightening Soviet police Organization, invades her home.

“He threw his burning cigarette onto our clean living room floor and ground it into the wood with his boot.
We were about to become cigarettes. »

• It is the beginning of a terrifying journey as we follow Lina, her mother and her brother,  who are deported to different gulags and hostile places inhabited by hostile soldiers…
Loaded in cattle train car, they travel hundreds of miles throughout the huge territory of Russia. The conditions of their compelled travel are inhuman: a mother has to give birth to her baby on her own, on the overcrowded and dirty car, helped by some passengers. Obviously, the prisonners can’t go out as they are pleased and don’t have any other place to do their business than in the floor of the car itself…

They are crossing the Arctic Circle to arrive to work camp located in the coldest parts of Siberia, where they have to dig for beets, do different kinds of exhausting chores… In other words: they have to fight for their lives under the crulest, least humane conditions. Actually, some of the characters sometimes make shocking choices to gain a better life or enable their relatives not to have as many hardships as the others… Lina finds her solace in her ability to draw, meticulously. She identifies herself in the events that she draws to remember, although she takes great risks as she sends these messages to her father’s camp, hopefully.

« Have you ever wondered what a human life is worth? That morning, my brother’s was worth a pocket watch. »

This is a story hard to read but also so hard to stop reading.
This is a story about an unbelievable strengh, about love and hope, about survival but it also shows how cruel and unsensitive humans can be.

In 1939, the Soviet Union invaded the three small Baltic countries, that are Latvia, Estonia and Lithuania. The Kremlin created a list of people considered as Antisovietic and condamned to be assassinated, imprisonned or deported to Siberia to be confined to the level of slaves. These people were doctors, lawyers, teachers, writers, musicians, artists, even librarians, soldiers, or businessmen: them and their families were part of an always longer list. The list of a mass extermination project’s victims. The first deportations happened on the 14th of June 1941.
•The writer, Ruta Septetys is the daughter of a lithuanian officer who managed to escape these camps but some of her relatives didn’t have this luck and died there. She wrote her first book about this subject because it is part of her family’s story, as well as because this aspect of the II World War is still unknown to this day. Surrounded by the Soviet Union and The Nazis’ Empire, the Baltic States were forgotten from the world and simply disapeared from the maps. She travelled to Lithuania several times to write this book and met families, inhabitants who survived, psychologists, historians…This story was based on true events. It is estimated that Josef Staline assassinated more than 20 billions of people during his Terror reign. In 1991, after 50 years of occupation, the Baltic countries found their independance back, as well as peace and dignity. They prefered hope to hatred and showed to the world that there is always light at the end of the darkest tunnel. 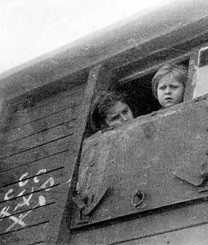 Have you ever heard of this story before?

« In the midst of winter, i found there was, within me, an invincible summer. » -A.CAMUS

2 thoughts on “Between shades of grey, Ruta Sepetys”