December 7, 1941- 7:48 a.m
« A date in which we live in infamy« , says President Roosevelt.
The well-known military strike on Pearl Harbor was intended by the Japanese Imperial General Headquarters as a preventive attack to keep the U.S away from interfering with military attacks Japan planned in South Asia, against overseas counties. 2,403 Americans were killed and 1,178 others were wounded. The attack left American people in a profound shock, since it happened on their territory, without any explicit warning nor any declaration of war. Contrary to expectations, it led to the superpower’s entry into World War II. From the end
If we know how much that particular event disrupted the course of history in an international standpoint, we know a lot less about the repercussion it had from within.

Feb. 19, 1942
The trap slowly closes in around 120,000 people from Japanese origins who live on the West Coast of the country. From the end of the 19th century, they were numerous to leave Japan in order to settle in to the United States. The law prohibits them to have the American citizenship, however their children, who were born there, are Americans. Suddenly, they all became suspects, potential betrayers, inside ennemies. President Roosevelt signes the executive order n°9066 to remove every person of Japanese ancestry from the West Coast. They are placed in confinement camps as hysteria spreads across the country. American citizens fear another attack, as they are accused to be in cahoots with Japan to plan another strike or to poison water resources. Every descendant of Japanese immigrants have to bring back their radios and cameras to the authorities. Among 120,000 people gathered, two thirds of them are authentic American citizens 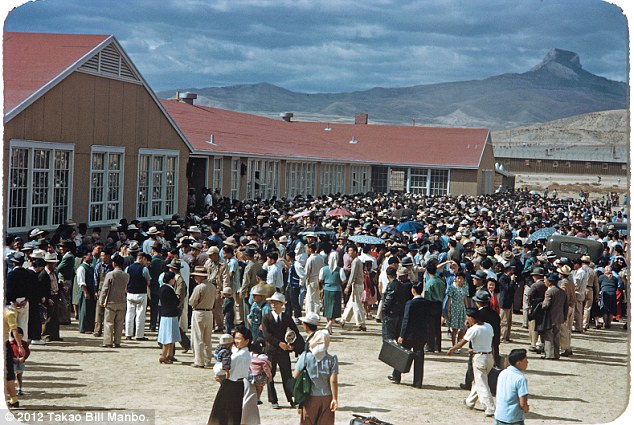 Form March to June, 1942
District after district, the army proceeds to the evacuation of these people, whose sight is now unwanted. One of them is Bill Manbo, an auto mechanic who dabbles in photography and model airplanes. He and his wife, Mary, as well as their baby son Billy, and his wife’s mother and younger siblings are transferred to one of 10 « relocation centers » in Heart Mountain, in the isolated Nothwestern Wyoming. Such as thousands of others, the family of seven -and soon eight again, since Mary’s father has been interned as « enemy alien » right after Pearl Harbor since he was teaching Japanese, before being determined not to be a threat- has to live its home, all of its belongings such as Bill’s garage and has to leave everything they know with a single suitcase. They are assigned to a small room in one of the shacks. The air is cold and dusty. All they an see is the desert that surrounds them. That’s where they are going to live, no one knows for how long.
Bill managed to bring his camera hidden in his suitcase with him and takes pictures of the camp sneakily at nightfall, as soldiers around the camp mustn’t know.

Fall, 1942
The West Coast is completely cleared of anyone Japanese. From now on, they are all living one of the 10 camps built in a hurry throughout the desert. More than 10,000 came by bus or by train to Heart Mountain, displaced without ever being judged. Two third of them are children and young adults with American citizenship. The head of the camp agrees with Bill taking pictures, but the instructions are clear: not any picture of the barbed wire nor of the soldiers around the camp. Bill wants to take pictures to keep memories of his son Billy as he grows older. But he had never envisioned that he would take pictures of him in a camp. There is no othe word to describe it; they are living in a camp. Everything is communal: laundry, food, toilets… Billy wears the American army’s costume his mother offered him before their arrival in the camp all the time. America is the country he was born in. In this place, nothing scares the children. They see it as a gigantic playground.

Winter, 1942
Nothing seems to be able to stop the American army in the Pacific Ocean. Hostility towards Japanese people increases always more. In the camps, life goes on. Everything is still to build and take care of: schools, meals… The inmates try to forget the barbeled wire all around them, as well as the soldiers who received the order to shoot anyone trying to escape. Bill repares cars who belong to the American army and earns a few dollars. Mary still doesn’t accept to be there. A few months ago, she was creating outfits for a successful theater company. Now, the temperatures are sub- zero temperatures and the cold wind infiltrates their room. It’s freezing cold. Sumo games are organized to encourage spring to come. Bill has never seen before, he grew up playing baseball.

1943
Japan isn’t invincible anymore. Still at the head of an Empire, they are defeated once by the American army and go through heavy casualties. It will soon be one year since Bill and his family came to this camp. All together, the prisonners celebrate the Independance Day on the 4th of July. But this year, surrounded by barbed wire, they are uneasy. 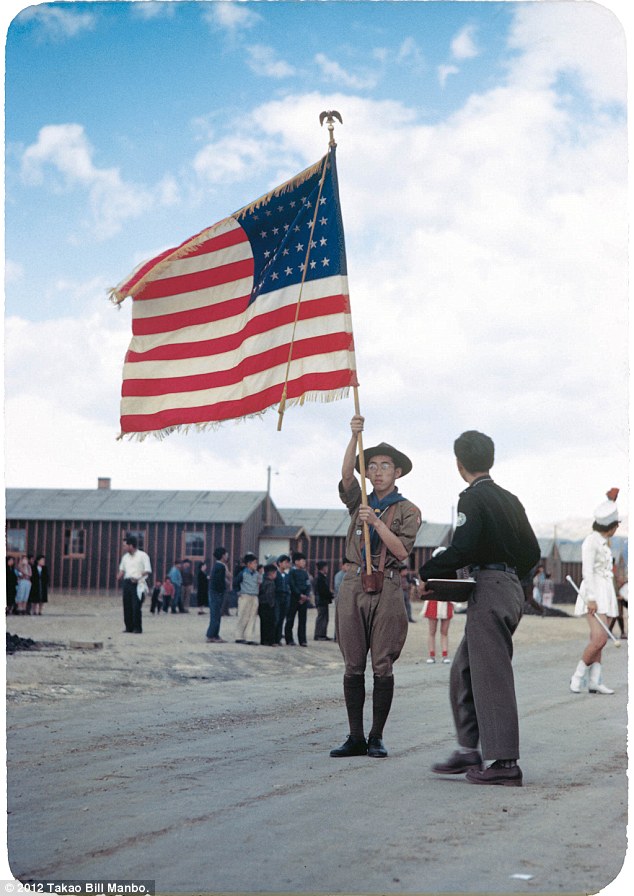 « Why is this country, our country that we are celebrating, emprisonning us? »

They are also allowed to celebrate the Buddhist calendar’s celebration of the middle of Summer. Women are dancing during a long time, colourful in their yukatas, light kimonos. Bill takes a picture of his son behind the barbed wire, so that he doesn’t forget where he spent the fist years of his life. Since Pearl Harbor, Japanese immigrants were perceived as potential ennemies. But it slowly changes. The state allows Japanese men to fight in the colours of the US in European fronts. Beforehand, they have to make sure of their loyalty and each of them have to write a loyalty test, which hatches the inmates’ anger. One of the questions asks them who they respect between the President of the US and the Emperor of Japan. The authorities want to know if they are willing to swear allegiance to The US. Bill answers yes, but only if they get their rights back, as citizens of America. Because of that, he and his wife have to submit to an interrogation, that ends well for them. However, some of their neighbors are judged « disloyal », merely as they asked the end of the camps and displaced again to a « high surveillance » camp, far away. ?(This picture wasn’t taken by Manbo.)

Fall, 1944
The 442nd regiment is sent to the Eastern French front in the Vosges, where German soldiers are resisting. The Japanese American soldiers set the town of Bruyères free on the 19th and 20th of October. But as they release a Texan regiment surrounded by Germans, many of them die. According to Bill, they fought for the world to be free. But he is still locked up in this camp. He doesn »t even enjoy taking photographs anymore, since he knows each nook of it. He can’t stand waiting for the war to end and leaves to camp to find work. For a few weeks some of them are allowed to do so. But it’s not that easy: where to go? What welcoming will they find?
The West Coast is still prohibited to them.

May, 1945
Germany surrenders but Japan refuses to give in. The US decide to take drastic steps and use two atomic bombs that destroy both Hiromisha and Nagasaki. Japan finally yields and the war officially ends. The 442th becolmes the most decorated regiment of the American army but also the one with the heaviest number of deads. They changed the vision the American citizens had of Japanese immigrants. Each internee is given 25$ and a train ticket to the destination they choose. Bill and his family found the lights of Los Angeles back, their house and Bill’s garage with his tools, still as he left them. But many others didn’t anything left when they returned. Bill puts his camera away, his pictures in boxes and moves on to something else…

1988
The congress apologies for the camps.

1992
All grown up, Billy works for Boeing and envisions planes’ engines. 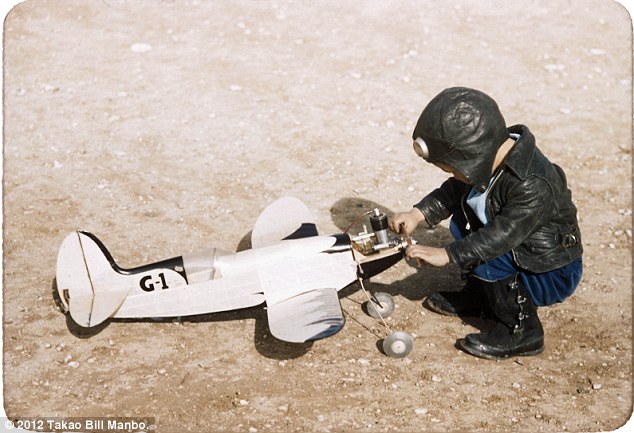 He doesn’t have any memory of his life in Heart Mountain. When his parents die, he gives all of the pictures his father took as a gift to the Japanese American National Museum. Sixty-five of them where published in a book intitled ‘Colors of Confinement: Rare Kodachrome photographs of Japanese-American incarceration camps in World War II’. You can see some of them here. 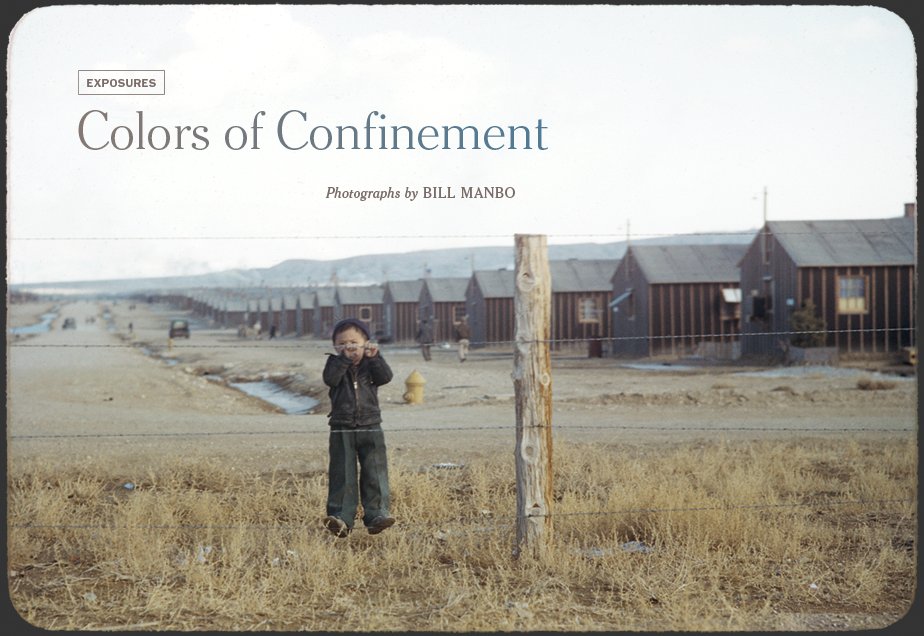