Black Mirror is a British drama series that deals with the consequences of our behavior with new technologies. This is an anthology series since it presents a different story and a different set of characters in each episode. Consequently, each episode features a different dystopia, still linked to technological advances, which sets in a near or more distant future : an episode may unfold in 2017 while another may take place in 2117. Indeed the series intends to give a general reflection to today’s world and all possible futures as well.

Black Mirror was airing on Channel 4 from 2011 for its two seasons and then, the giant Netflix bought the series to make a third season. Actually I don’t know if more episodes are going to be released but the remaining 13 episodes already are a good subject to discuss about. The series was nominated twice for the BAFTA (British Academy of Film

and Television Arts) and it won an Emmy Award and a Golden Rose Award.

Nowadays – that’s not a revelation – Internet dramatically impacted the world and our lives. The least scoop, the least intel, joke, personality is facebooked, retweeted, tumbled, googled and even mocked sometimes. We are all connected to the big World Wide Web. We consider the Internet as a fantastic creation and yet, we notice abuses : from impersonation, banking data theft, cybercrime to misinformation and bad jokes. Black Mirror uses all of that and emphasizes it in a satirical way to denounce our use of the web and all the technologies that possess a black screen.

The series’ pilot, untitled The National Anthem, unfolds in a future within reach, so close to our reality that it becomes almost present. The Princess of the Royal Family is kidnapped and her kidnapper threats the Prime Minister to kill her unless if he has live sexual intercourse with a pig on national television – I wished this episode’s plot would be a joke but it’s not – and the kidnapper gives a list of technical specifications designed to make it impossible to fake. The kidnapper’s threat has been also released online on Youtube and despite having only been up for nine minutes, the video has already been viewed and downloaded a lot of times and posted multiple times on the Internet. The Prime Minister has some hours to act before the Princess was killed… Here we have a thought on the over media coverage of political life where the Prime Minister has, in a critical situation, to deal with his convictions but also with the public opinion which is so loud, powerful, quick to change and sometimes violent thanks to social media where everybody can express its mind and its point of view.

Then the third episode, untitled The Entire History Of You, unfolds in a more distant future where rich people have the possibility to implant a “grain” behind their hear that will record everything they do, see or hear. People can play their memories ad infinitum in front of their eyes or on a screen. At first sight, that’s well convenient to remember this old mate’s name with whom you were sitting next to in some classes some years ago. However for Liam Foxwell, a young lawyer, that’s convenient to review and examine his wife’s tender gazes when she glances suspiciously a friend of him… That’s impossible here to not make a parallel with the smart and connected Google Glass which will allow soon the user to record some contents with just a wink.

Finally, the second episode of season two, untitled White Bear, is, for my liking, one of the most shocking and heartbreaking episode. We follow a woman, named Victoria Skillane, who’s waking up in a small town typical of United Kingdom and she is amnesiac. She’s soon followed by a plenty of people who are filming her with their smartphones and some people who are hunting her and who obviously want to kill her, 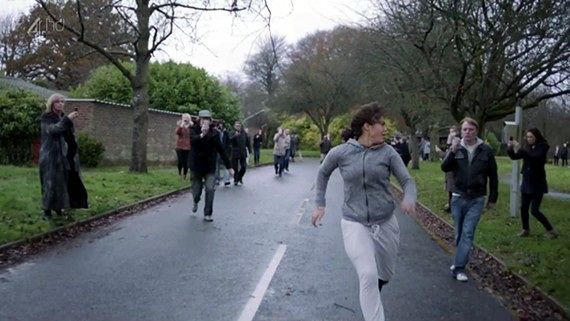 with their nightmarish masks and suits. Why the hell are these people following her ? Why does an amount of people film her with joy and fun while these crazy guys are shooting at her with their guns ? I won’t answer these questions in order to not spoil you but the twist is huge, believe it my dear readers 😉

to reveal how we behave, how we react, how we use computers and smartphones to do good and bad things. This is a kind of a “black mirror” that returns our reflection. Some episodes won’t be suited for sensitive souls and weak hearts, others will certainly make you moved but no one won’t let you indifferent !

The series manages in not giving a judgment but in making a criticism of occidental Mankind, with wealth people and their comfortable life, which we do have to interpret ourselves. The series illustrates one of a few characteristics of the Progress and its dangers

so I assume it could be a wise choice to talk about it in the notion “Idea Of Progress”. As a conclusion, Black Mirror alarms on the possible abuses of technologies with our attitudes towards them in general as in some dystopian masterpieces as Orwell’s 1984 and Animal Farm, Huxley’s Brave New World and Bradbury’s Fahrenheit 451.