Women won the vote in Australia in 1902, 18 years before America.

While we are learning a lot about the limits of American democracy under the strain of the Covid-19 pandemic, one thing is rock solid: America’s ardent embrace of its multifaceted suffrage history.

2020 marks the centenary of the momentous – though by no means world-leading – passage of the 19th amendment in 1920, which granted women the right to vote. A raft of public events will mark the occasion – chief among them the unveiling of the first statue of real historic women in New York’s Central Park, a (much) larger-than-life size memorial to women’s rights pioneers.

But what about here in Australia, which was the actual, not anthemic, Land of the Free when it came to the federal franchise?

Where are the memorials to our female freedom fighters?

In 1902, almost two decades before the United States, Australia became the first country in the world where white women won – I’m sorry, they weren’t given the franchise, they won it – full political equality with men: the right to vote and to stand in parliament. As one Columbia University sociologist who travelled to the antipodes to study “the social experiment of Australia” remarked, the world’s newest nation “has worked out a unique and interesting experiment in democracy”.

Australia’s primacy was a curious fact with which political pundits of the time existentially grappled. “The United States should have been the first nation to enfranchise it women,” admitted one US newspaper, “but we failed to live up to our principles.”

Australian women, too, were studied to understand the characteristics that groomed them for global leadership. “Her fearlessness, her grit and her entire absence of artificiality and diffidence” was the conclusion.

So what have we got to show for our own centenary of women’s suffrage in 2002, and the strident, fearless, tenacious women who earned Australia its pre-war international reputation for possessing “the purest type of democracy the human race has ever known”?

I’ll tell you what we have. We have the Centenary of Women’s Suffrage Memorial Fishpond Beside the Wheelie Bins.

Next time you are in Canberra, make a trip to the Museum of Australian Democracy at Old Parliament House. Go to the front information desk and ask to see the Centenary of Women’s Suffrage Commemorative Fountain, for this is the object’s official name. If you are lucky, the attendant on duty will know what you are talking about. The last time I visited the Museum of Australian Democracy, in 2019, the poor fella didn’t have a clue.

Fortunately (for I was conducting my own experiment in democracy), I knew my way to the House of Representatives Garden, where, after you have walked past the Museum of Australian Democracy rubbish collection point, you find a pretty rectangular wading pool lined in purple, white and green tiles. The ankle-deep water is animated by jets that project more of a gentle spit than a ground-breaking splash.

This symbolic millpond is all we have to represent the political powerhouse that was federation-era Australia. Unlike Westminster, which has suffrage heroes Millicent Garrett Fawcett and Emmeline Pankhurst immortalised in stone in its parliamentary precinct, there is no statue of Vida Goldstein, Australia’s preeminent suffragist. Indeed, in Goldstein’s home city of Melbourne, which boasts 580 statues (double Sydney’s tally), only 1% are REAL women on their own in a public space. Of those five rarities, two are athletes, one is Joan of Arc (which the Age called at the time of purchase in 1906 “an almost inconceivable stupidity”), one is Queen Victoria, and one is Joyce Oldmeadow, a collector of children’s literature, depicted sitting and reading to children.

I’d like to think that Australia’s reluctance to commemorate its trailblazing advances in participatory democracy is due to sensitivity about addressing the complicated legacy of women’s suffrage activism in this country. After all, the same legislation that enfranchised white women deprived all Indigenous people of these same federal civil rights. And without a hint of protest from suffrage leaders like Goldstein, who were more concerned with the plight of their “less fortunate British sisters”.

I wish that it were so, for coming to terms with the shadow side of celebratory nationalist narratives must be part of the truth-telling process that the Uluru Statement has called upon us all to adopt for the sake of healing. 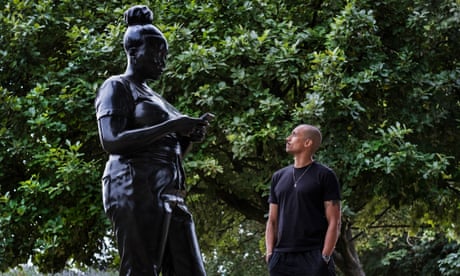 But fear of what lies beneath is not solely what hinders the lauding of our democratic DNA. Rather, it’s a gender-biased national history. We are so accustomed to equating nation-building (and defending, and contesting) with men’s activities and men’s ambitions that we’ve betrayed the very people who put modern Australia on the map.

If we admit that our democracy is based on a forward-thinking, risk-taking approach to seemingly intractable problems like gender discrimination, then perhaps we would be more willing to embrace ongoing challenges. We could recognise and support women’s continuing efforts towards full equality as matters of national security. We might even trust ourselves to find innovative solutions to ostensibly entrenched racial inequities, biases and bigotries.

Instead of fighting shoulder to shoulder, as our suffragists did, we could begin to walk side by side, as our First Nations are asking us to do.

• Clare Wright is professor of history at La Trobe University. Her latest book is You Daughters of Freedom: The Australians Who Won the Vote and Inspired the World

Publié sour 8. Territory & Memory,LLCET°_3-2-Anchoring and inheriting and tagged with Australia, CE, discrimination, Women
Comments Off on Women won the vote in Australia in 1902, 18 years before America.