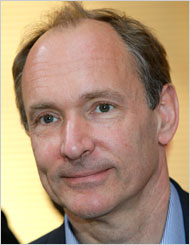 Any conversation with Tim Berners-Lee, the creator of the Web’s bedrock software standards, tends to be fast-paced and nonlinear. When he worked at the CERN physics laboratory in Geneva, colleagues tried to get him to speak French instead of English, in hopes of slowing him down.

No surprise, then, that a half-hour dialogue with Mr. Berners-Lee, director of the World Wide Web Consortium and these days a professor at M.I.T., at a symposium on the future of technology last Thursday, fit that mold. I started, just for fun, with a historical question. If he were do it over again today, would he do anything differently? Any regrets?

Mr. Berners-Lee smiled and admitted he might make one change — a small one. He would get rid of the double slash “//” after the “http:” in Web addresses.

The double slash, though a programming convention at the time, turned out to not be really necessary, Mr. Berners-Lee explained. Look at all the paper and trees, he said, that could have been saved if people had not had to write or type out those slashes on paper over the years — not to mention the human labor and time spent typing those two keystrokes countless millions of times in browser address boxes. (Today’s browsers, of course, automatically fill in the “http://” preamble when a user types a Web address.)

With history dispatched, Mr. Berners-Lee focused on his current enthusiasm — getting more government data on the Web, in the interest of openness, transparency and efficiency. Mr. Berners-Lee is working with the British government in its efforts to do so, and at the symposium he cited some favorite examples of benefits of simple mash-ups like combining roadway maps with bicycle accident reports. The result, he said, helps bikers know which roads to avoid to reduce their chances of being hit by a car.

In a separate interview at the symposium in Washington, sponsored by the Finnish government and the Technology Academy Foundation, Mr. Berners-Lee said this was the year when governments around the world, led by Britain and the United States, are beginning to put vast amounts of information they collect on the Web. It is often seemingly mundane data in raw form, he said, including traffic, local weather, public safety and health data.

But the lesson of the Web, Mr. Berners-Lee said, is that making information and simple online tools freely available inevitably fuels innovation. If you liberate the data, he asked, who knows what applications people will create?

“Innovation is serendipity, so you don’t know what people will make,” he said. “But the openness, transparency and new uses of the data will make government run better, and that will make business run better as well.”