President Obama in figures and numbers 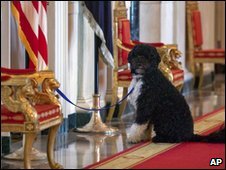 The Obamas’ dog Bo is valued at $1,600 Barack Obama made millions in book royalties last year and took delivery of a special $1,600 gift – the family dog Bo, financial records show.

Royalties from “Dreams From My Father” and “Audacity of Hope” earned him at least $1m each, according to filings released by the White House.

Bo, a Portuguese water dog given to the Obamas by the late Senator Edward Kennedy and his wife was valued at $1,600 in Mr Obama’s financial disclosure form.

The value of Mr Obama’s Nobel peace prize medal and diploma were “not readily ascertainable”, the document said.

But he donated to charity the award’s $1.4m prize money.

The disclosure forms do not typically list exact values for assets and income items, instead giving a range.

Among the president’s $2.3m to $7.7m in assets are checking accounts, US treasury notes and bills, college savings plans for daughters Sasha and Malia and a pension from his service in the Illinois state legislature.

The US president also made hundreds of thousands of dollars from the sale of securities inherited from his grandmother.

In April, the White House disclosed the president’s tax filings showing he and Mrs Obama had earned $5.5m, mainly from book royalties.

In addition to his book income, the president earns a salary of $400,000 per year from the US government.