Vergie Banks is a renowned Louisiana artist. She is famous for the colourful vision she gives of her native state. Her most famous paintings belong to the “Little Red Tricycle” series. When you read the title of this series, you can’t help thinking about the famous fairy tale “Little Red Riding Hood”.
Indeed, the composition of her paintings is quite similar to that of popular illustrations of the tale.  I chose one of Albert Anker’s paintings to offer a comparative vision of the theme. The focus : In both paintings, the focus is on a little girl who reprents youth, ingenuousness and innocence. Each little girl is wearing casual clothes, which are typical of their time and social background.  So viewers can easily identify with them. Both have a very touching day-dreaming expression on their faces.

The action : One is walking through the woods. She is carrying a loaf of bread and a big pot of cream. The other is having fun, cycling on her red tricycle. Once again, it is all the easier to identify with them as each little girl has been “caught” while performing a routine action.

The setting : Both girls are in their ‘natural’ environment, so to speak, and are framed by vertical lines. One is amongst nature. You can see fields and meadows in the distance. The forest she is walking through is anything but thick yet the trees emphasize the girl’s loneliness. Their rigidity and isolation are somewhat upsetting.

On the other hand, the other girl is in a colourful street with multicoloured houses. There is no traffic, the place appears both joyful and secure. Indeed, the walls of the colourful houses offer a well-balanced background that makes them look reassuring and protective.

Each of them is on a road or a path, – we can only see a small portion of it. In a way, this road/path can be seen as the symbol of their young lives. It could prove dangerous in both cases : some nasty creatures could be lurking in the bushes or behind the trees in the first painging. The centre line in Vegie Banks’s painting prove that the little girl is cycling in the middle of the road, unaware of potentially dangerous traffic.
Their respective innoncence could prove risky. Yet, there is a differnece in the way each road/path is to be seen. In Anker’s painting, the path is behind the little girl, so in a way, we can guess that most of her life is now behind her. Indeed, we alll know that a nasty wolf is about to take her life. Whereas, in Vergie Banks’s painting, the road is in front of the little girl. We guess that her young life has just begun and looks promising.

The colours : Albert Anker’s choice of colours is typical of the middXIXth century : He used a whitish beige, blue and red.for his central character. The elements of the setting are painted in cold faded colours which emphasize  its gloomy aspect. Vergie Banks also chose those three dominant colours : beige, blue and red for her central character, but their warm tones find a colourful echo in the elements of the setting, thus creating a buoyant and vibrant harmony. In all the paintings of the series, the little Creole girl doesn’t change much. She always wears the same blue overall. The red tricycle is undoubtdly the key link between all the compositions of the series. 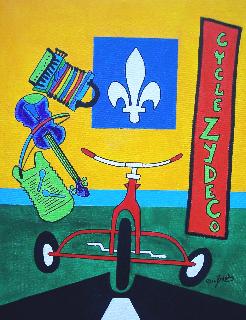 Who is this little Creole girl? Is she the artist’s portrait of a younger self? Is she a member of her family or the epitomization of a vibrant community? She seems to be thriving in her colourful environment, among musical instruments or multicoloured houses, which convey an impression of energy, exuberance and joy of living. That’s why we love Vergie Banks’s painting so much!